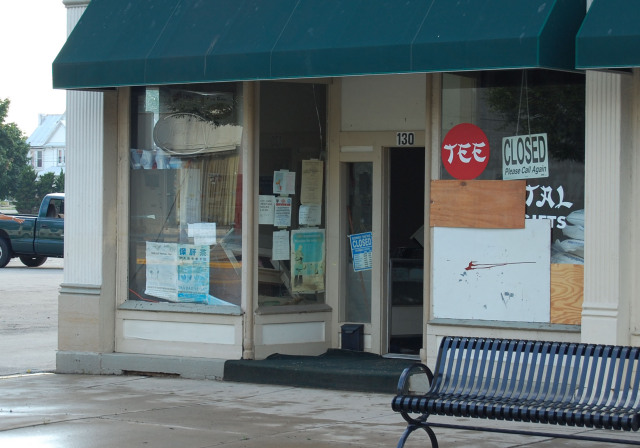 Tee's Oriental Grocery - after the flood. (See previous post for the "before" picture)

It's been a very long several days to be a Hancock County resident. Early yesterday overnight in Findlay, the flood water started advancing far more than anyone expected. By the time it crested around noon, it had tied the record flood level set in 1913. Huge parts of town were underwater.

Downtown was worst hit of the business areas. Pretty much the entire business district suffered some amount of flooding. The bars and pawn shops north of the river were hit worst. The water was chest high through most of that area. West Main Cross was also terrible, with waist high water in many parts over by Dietsch and Great Scot.

Most heartbreaking were shops like Tee's Oriental Grocery - a wonderful little local resource - who had probably four feet of sewage that had crashed in and pretty much tossed everything onto the ground. Then there is Crooked Needle, a quilting shop that had just finished moving to its new location downtown. They'd been open one day when the flood hit and destroyed most of their inventory.

There are happy points, though. The most relieving news is that Coffee Amici was totally spared, despite being two blocks from the river. In fact, they were open today! Their basement absorbed the water, and an anonymous hero sandbagged their entrance in the middle of the night. And Flores Café was open in a diminished capacity, serving tacos and tamales. Folks were inside of Revolver, working feverishly to get things cleaned up. Satang Thai was hit, but should be open again tomorrow. Diestch on Tiffin hopes to be back open in a week.

But this all ignores the real tragedy of this flood: the thousand people who have been displaced from their homes in Findlay. If you can afford it, please make a donation to the United Way. They're doing great work to help get people back on their feet, and donations make a real difference to help them out.

This article has been viewed 13322 times.